Quarantine, Ventilate, Be Ready to Quit: In-Person Theatre in the Time of COVID

When planning a full season of shows for Premiere Stages at Kean University in Union, N.J., artistic director John Wooten (he/him) typically submits a four-page proposal to Actors’ Equity Association. But for a single recent production of Fannie Lou Hamer, Speak On It!—staged outdoors just five times with two performers for relatively small, socially distanced and masked audiences—Wooten “went back and forth 15 times” with the stage actors’ union, filling up a safety worksheet with a “multicolored rainbow” of highlights of concerns and solutions, for a document that ended up close to 30 pages.

“I understand Equity’s position—they need to protect their members at all costs,” said Wooten. Those costs, it turns out, were ultimately manageable for Premiere Stages, due to a confluence of factors: having a campus COVID-19 protocol and housing infrastructure in place, as well as a flexible outdoor performance space on the university grounds, at the Liberty Hall Museum, and enough money in the budget from shows they weren’t producing due to the pandemic lockdown.

Of course, it might have been cheaper, not to mention less of a headache, to produce nothing at all. But when Wooten heard about Cheryl West’s play about the 1960s Civil Rights icon, commissioned by Chicago’s Goodman Theatre for their mainstage but recently condensed by West into a brief, portable version specifically for adaptability to our small-gathering present, he saw the chance to stage a timely election-themed event; the show highlights both the brutal racism that Hamer and her generation faced, as well as the price they paid for the contested right to vote.

This leap of faith was not without its share of motion sickness.

“It was all a little surreal, from the moment I decided to do the play to the final Q&A question,” Wooten confessed after the closing performance, which I attended with my family on Sun., Oct. 18—my and their sole in-person theatre outing since March (and likely for the foreseeable future). “The whole time we were working on it, I would wake up feeling like Icarus and wondering if my wings were going to melt. But it was worth all the hurdles.”

As the nation heads into a winter COVID surge that shows no sign of abating, even as promising news of vaccines offers a light at the tunnel’s end, theatres across the country are trying all kinds of alternatives, from drive-in performances to Zoom plays, storefront tours to solo installations, to keep artists employed and audiences engaged. A little more than a dozen theatres have managed to mount in-person performances with the union’s approval (and anecdotally, non-Equity theatres that have ignored health protocols have not fared well), and a few that have announced in-person performances for early 2021 are very much in “pending,” if not outright aspirational mode. 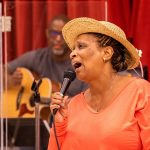 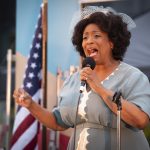