How could a charismatic, guitar-playing, innovative vocal stylist known as the “Godmother of Rock ’n’ Roll,” who sold out stadiums in her day, die in relative obscurity while the rock stars she influenced, including Little Richard, Elvis Presley, Johnny Cash, Chuck Berry, and Jerry Lee Lewis, reached superstardom?

Playwright Cheryl L. West explores the life and legacy of Rosetta Tharpe in her new musical Shout Sister Shout!, which was primed for Broadway before the pandemic hit. But like Rosetta Tharpe herself, West isn’t about to let anything, including a global pandemic, keep her down long. Shout premiered at the Pasadena Playhouse in 2017 and underwent restructuring before opening to stellar reviews at Seattle Rep last November. The producers, the Ragovoy Entertainment Group, plan to further develop the show with a regional theater and then ultimately mount a Broadway run. 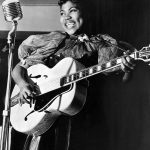